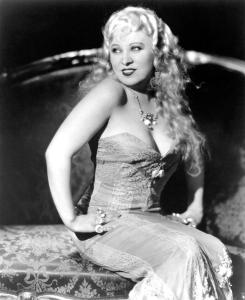 West in her hit movie, “She Done Him Wrong.” Photo from That’s Entertainment.

Witty, sexy, and way ahead of her time, few performers brought more swagger to the stage and big screen than Brooklyn-born Mae West. On April 27, 1927, West was released from the Women’s Workhouse, a prison on what today is called Roosevelt Island. Her crime? “Indecent public performance” for her hit show, Sex.

Born and raised in a Brooklyn family that nurtured her precocious performing talents, West began performing on vaudeville stages as a teenager, and had been toiling on Broadway as a writer and supporting performing for nearly a decade before her first break, a comedy-drama she wrote herself called Sex, the story of a hooker trying to marry a rich man.  The play drew huge crowds, who loved the raunchy dialogue, but condemnation from the Society for the Prevention of Vice, last seen on this blog goading abortionist Madame Restell into suicide. The SPV implored city officials to take action.

West was performing on stage at Daly 63rd Street Theatre when the police raided the theater and arrested West and the entire cast in February 1927. On April 19, 1927, West was found guilty of indecent public performance and sentenced to ten days in jail. Ever the charismatic optimist, West handled Welfare Island about as well as possible, striking up a rapport with her fellow inmates, and creating the character sketches for Diamond Lil, which became one of her biggest hit movies a few years later. Being a celebrity didn’t hurt, as the warden took her out to dinner on several occasions. On April 27, West was released two days early for good behavior. 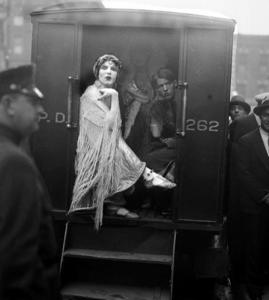 West in the back of police van after “Sex” raid. Photo from NY Daily News.

Released from jail with her fame and stature enhanced, West didn’t tone things down one bit. Her next play, The Drag, about gay life in New York, was banned on Broadway, and played to hit crowds in more accepting places like New Jersey and Connecticut. Her next play in New York, Pleasure Man, briefly landed her in jail again, to which she responded, “Those who are easily shocked…should be shocked more often.”

West starred on Broadway for the next five years, but eventually took refuge in Hollywood. Though censors didn’t appreciate risqué lines such as – wait for it – “Why don’t you come up and see me some time?” she became on the biggest movie stars of the 1930s. West lived until 1980, and was entombed in Brooklyn, where it all began. Today West is definitely known for her sassy one-liners (“Is that a pistol in your pocket, or are you just happy to see me?’), but she should also be remembered for embracing a radical free-spiritedness that was decades ahead of its time.