Gotham’s most historic murder was the shooting of El-Hajj Malik El-Shabazz, formerly known as Malcolm X. Malcolm X’s career was inextricably bound to New York City, the place that brought him fame and saw his demise on February 21, 1965.

Born in Detroit in 1925, Malcolm Little converted to the Nation of Islam while in prison, and upon his release, founder Elijah Muhammad sent the re-named Malcolm X around the country to open new Nation chapters. In 1954, Malcolm X opened Temple 7 in Harlem, where his powerful oratory and charisma quickly grew a small storefront operation to thousands of followers. In 1957, he singlehandedly waved off a potential riot at a police station, leading one officer to remark, “No one man should have much power.” (Of course, many do- from politicians to police commissioners to military generals, probably even pop celebrities. We can divine what he really meant.)

Malcolm X was often described as “militant”, but perhaps “inflammatory” or “provocative” would be more accurate adjectives. He showed no deference to white power, preached racial separatism, and in lifting blacks, argued that anger at the injustice of their treatment, even if the result led to violence. He infamously declared that JFK’s death was just “the chickens coming home to roost,” one of the ultimate “too soon” moments.  It earned him a three-month suspension from Elijah Muhammad, who was growing increasingly nervous about Malcolm X overshadowing him.

In 1964, Malcolm X converted to Sunni Islam, changing his name to El-Hajj Malik El-Shabazz*** and performing Haaj. While in Mecca, Shabazz was struck by the absence of racial hierarchy under Islam, and abandoned his black separatist position. This so-called moderation should not be overstated- the group he subsequently founded, the Organization of Afro-American unity, did not include whites (“Maybe John Brown,” he quipped), and his denunciations of Christianity were not going to build bridges in the United States. Nevertheless, Shabazz’s philosophy and base of power led lasting resentment from his rivals at the Nation of Islam.

On Malcolm X Boulevard in Brooklyn.

By the evening of February 21, 1965, when Shabazz stepped onto the Audubon Ballroom stage in Washington Heights to address the Organization of Afro-American Unity, his family had already survived a bomb scare, and Shabazz was convinced of his impending death at the hands of the Nation of Islam. Indeed, just as he began his speech that night, shots rang out, and Shabazz was hit seven times. He likely died before he reached the hospital. The Nation of Islam, never formally implicated, has all but claimed responsibility.

It took three days for Shabazz’s friends to find a place of worship in Harlem willing to accommodate the funeral. Bishop Childs, who offered his church, received death threats. The funeral was held on February 27, and featured a tribute from Ossie Davis, who closed, “In honoring him, we honor the best in ourselves. And we will know him then for what he was and is – a Prince – our black shining Prince! – who didn’t hesitate to die, because he loved us so.”

One wonders what Shabazz’s influence would have been had he lived. Violent groups like the Black Panthers would have carried on with their militarism regardless of his moderation, and the quick demise of Shabazz’s religious and political organizations following his death shows they were held together largely by his charisma. Yet a person of his electric charisma likely would have kept making waves in the turbulent 60s. 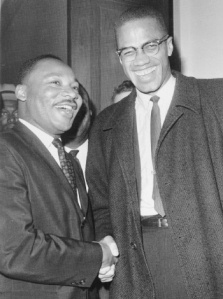 Dr. King and Malcolm X enjoying a moment during their only meeting.

Malcolm X has never been corporatized like Martin Luther King, but his legacy has also been simplified, as if he and King were the ying and yang of black civil rights. While it is true that King was steadfastly nonviolent, and Malcolm X did not rule out violence, by the end of their lives they had much in common. Both held positions that today would be described as “radical” in their critique of the U.S. government. King built impressive connections with American politicians, while Shabazz was forging relationships with African and Muslim leaders across the Atlantic. Both recognized the link between racism and economic oppression. When Malcolm X rallied Harlem Hospital workers as part of a strike by Local 1199 (now one of New York’s most powerful political players), King was originally meant to join him on stage. Malcolm X insisted on building coalitions with Puerto-Ricans in New York and Mexicans in California. Coincidentally, Shabazz was 39 when he was killed, the same age as MLK when he was assassinated three years later.

Here is a video of their encounter!

I am hardly qualified to opine as much as I already have on Malcolm X, so at this point I’ll refer you to a pair of 50th anniversary tribute pieces from The Root and The Daily News. I’ll add more as I come across them in the next day or two.

New York City permanently recognizes Malcolm X through a pair of Malcolm X Boulevards, one in Harlem, co-representing northern Sixth Avenue with NY Public Library benefactor James Lenox, and one in Bed-Stuy. The mosque he founded while a member of the Nation of Islam has since moved to West 127th Street, and the Malcolm X Grassroots Movement has been deeply involved with Eric Garner protests.  After years of neglect, the Audubon Ballroom, located on 165th and Broadway, was restored as a dual purpose building for Columbia Medical School and the Shabazz Educational Center.

[Edit]: The Brian Lehrer Show had a great segment this morning.

[Update]: Thanks to friend of the site Daniel for showing us how we can all get out Malcolm X Mastercards! As a child of the 90s, I should have known you can commodify anything.

*For nitpickers, February 21 is technically tomorrow, but Janos.nyc doesn’t run on the weekends, and this felt too important to leave out.

***From this point in the piece, I’ll refer to pre-Hajj “Malcolm X” and post-Hajj “Shabazz”.