The Central Park event was organized by Paul Williams, an 18-year old who had founded the first serious rock and roll magazine, Crawdaddy, as a college freshman a year earlier, and Jim Fouratt, a gay actor who would co-found the Yippies a year later. That January San Francisco had launched it’s first “Human Be In,” called Gathering of the Tribes, which had drawn 30,000 people to listen to Timothy Leary, dance to the Grateful Dead, and vibe on the free acid distributed to the crowd. The New York “Be In” would lack even that level of structure (if that’s the right word…), with flyers plastered around the city simply calling on people to “come as you are” to Sheep’s Meadow.

The only reliable coverage of the day’s events can be found in the Village Voice, yet another reminder of that once essential newspaper’s sad demise over the past decade. Don McNeil captured the moment:

Bonfires burned on the hills, their smoke mixing with bright balloons among the barren trees and high, high above kites wafted in the air. Rhythms and music and mantras from all corners of the meadow echoed in exquisite harmony, and thousands of lovers vibrated into the night. It was miraculous.

It was a feast for the senses; the beauty of the colors, clothes, and shrines, the sounds and the rhythms, at once familiar, the smell of flowers and frankincense, the taste of jellybeans. But the spirit of the Be-In was tuned — in time — to past echoes and future premonitions. Layers of inhibitions were peeled away and, for many, love and laughter became suddenly fresh.

People climbed into trees and made animal calls, and were answered by calls from other trees. Two men stripped naked, and were gently persuaded to re-clothe as the police appeared. Herds of people rushed together from encampments on the hills to converge en masse on the great mud of the meadow. They joined hands to form great circles, hundreds of yards in diameter, and broke to hurtle to the center in a joyous, crushing, multi-embracing pigpile. Chains of people careened through the crowds at a full run. Their energy seemed inexhaustible. 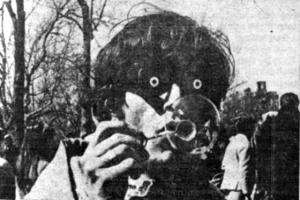 The police were obviously suspicious of the event, but unsure how to proceed. Their first attempt to break up the protest was met by chants of “daffodil power” and “We love cops/Turn on cops,” which sent them into a retreat as hippies doused their cars with flowers. Festivities continued into the evening.

You can catch a brief snapshot of the magic in a clip from Ciao! Manhattan, at 5:20-5:48 showing Allen Ginsberg and Edie Sedgwick.