Not long after midnight, the 23 year-old Diallo was outside of his apartment, having just grabbed a bite to eat. Four police officers drove by: Edward McMellon, Sean Carroll, Kenneth Boss and Richard Murphy. They were part of a plain-clothed Street Crime Unit, and they were searching the area for a serial rapist.

Though the lighting outside of Diallo’s building was dim, the police thought Diallo resembled the rapist, or was perhaps trying to break into the building. They jumped out of their car, drew their guns, and shouted, “Police!” When Diallo removed his wallet to show his identification, Carroll yelled, “Gun!” The officers began firing on Diallo from close range on the building staircase, and when McMellon tripped and fell backwards, his colleagues thought he had been shot. After he was dead, a search of Diallo’s person revealed that he had no weapon, and  may have been trying to produce his immigration papers.

The events of that evening are difficult for me to write about. I was a teenager at the time, and like most minority youths, had been harassed by cops, who were essentially given carte blanche under Mayor Giuliani’s crime reduction plan. Diallo’s death was too horrific to imagine. He was struck by 19 bullets, with two officers reloading their guns after Diallo was likely already dead.

As is often the case in police killings, some tried to stereotype Diallo as a trouble-making “street peddler.”   In fact, Diallo was a well-educated and well-traveled child of two affluent parents looking to resume college-level coursework in New York. He was earning money selling clothes downtown for this purpose, which is where the “street vendor” label came from. No one will ever know what was going through this head that night, but given that he understood English fluently, he may have initially fled the four plain-clothed men armed with guns out of fear, and may  have produced his wallet because he thought he was being robbed. Either way, characterizing his behavior that evening as suspicious is inconsistent with what we know about his background.

The four officers were indicted for second-degree murder in the Bronx, but their trial was moved to Albany on the grounds that they could not obtain a fair trial in the Bronx. The Albany jury acquitted all four of the officers of all charges. Boss is the only one of the four officers still with the police force; he was reassigned his gun in 2012. Carroll later offered an emotional apology. 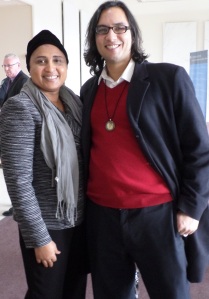 I had the privilege of meeting Amadou’s mother, Kadi Diallo, at a remembrance event last week.

The subsequent protests, noted for their interracial composition, lasted for weeks, with activists making very similar policy demands to those being made after Eric Garner’s death. Another round of tense protests followed the acquittals. The Coalition Against Police Brutality, which had formed a few years earlier after a different set of policing incidents, drove many of the protests, and its lawsuit,Daniels v. City of New York, led to the disbanding of the Street Crimes Unit and the release of police arrest data. Police Commission Howard Safire was eventually replaced by Bernie Kerik, who pledged a (partial) return to community policing.

Settlement from Diallo’s wrongful death lawsuit was used to set up a scholarship fund and start the Amadou Diallo Foundation (run by his mother, Kadi), which is hosting an event on improving race relations tomorrow morning at Columbia’s SIPA program.

Bruce Springsteen and Wyclef Jean both wrote songs about the shooting.

Post-script: On February 5, I attended a panel at Columbia University featuring Mayor David Dinkins, attorney Norman Siegel, Amadou’s mother Kadi Diallou, and former detective Graham Weatherspoon. The topic was restoring police/community relations, and while each of them had something meaningful to say, I was most struck by Kadi Diallo’s call to humanize her son. Media reports, even supportive ones, she noted, kept referring to Amadou as an “African street vendor.” In reality, Amadou had lived all over the world with his relatively affluent mother and father, and studied at excellent schools. At the time of his death he was both saving up money for an American college degree and figuring out how to transfer international credits.

I don’t know if this depiction of Diallo makes his death more or less tragic, and I don’t think it’s supposed to. Perhaps it is just one woman’s way of asking that her son be treated like a person, and not a narrative. I’m just an amateur history writer, and I don’t consult primary sources for every post. Ironically, I’ve made simple mistakes both times I’ve written about Amadou Diallo because being around NYC when it happened has imbued me with subconscious confidence that I know what really happened.

You can see in the post above that I’ve crossed out and replaced my previous version, rather than simply deleted it. I want to take responsibility for perpetuating the simple African street vendor narrative, and I want to be called out every time I get the history wrong on Janos.nyc.

The Joe Strummer mural in the East Village says “The Future is Unwritten.” But sometimes, the past is too, and that’s worth changing.