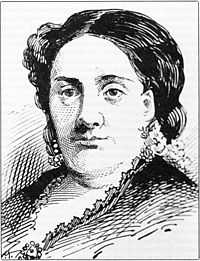 One of the most controversial figures of her time, Madame Restell provided illegal contraception and abortion pills to women of all classes for decades until she committed suicide on April 1, 1878. Born Ann Trow in England, and Ann moved to New York City when she was 20, and eventually married radical freethinker Charles Lohman. She took the name Madame Restell when she, her husband, and her brother got into the quack pharmaceutical business, and needed a name with sophistication.

Beginning in 1839, Restell advertised openly in newspapers for “female pills” and more complex procedures, charging women $20-$100 per visit depending on their wealth, and providing ancillary services such as surreptitiously birthing babies and bringing them to orphanages.

Needless to say, Restell was much maligned and reviled for her work, being arrested multiple times, nearly convicted of murder, slammed in newspapers, and surrounded by an angry mob who shouted, “This house is built on babies’ skulls.” The five-story house in question, on 52n and 5th, only infuriated her enemies further, evidence as it was of the lucrative contraceptive pill trade.

There is, of course, a sexist element to denunciations of her as “the Wickedest Woman in New York.” She was providing a service denied to women of all statures. Women of wealth might be able to afford better care or services, but it all had to be done clandestinely. Yet Restell definitely falls short of being a saint; unlike some of her successors, her business was built on peddling a mishmash of home remedies that ranged from ineffective to dangerous. 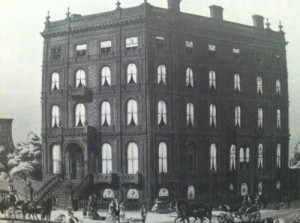 During the 1870s, Restell came into the crosshairs of Anthony Comstock, one of the worst kinds of exhausting moralists that fortunately this city doesn’t take seriously anymore. For example, he succeeded in passing the “Comstock Law”, which banned using the postal system to transport obscene materials (including contraception) and had himself appointed a special agent of the Postal Service so he could hunt for illicit mail personally.

One day Comstock accosted Restell at her apartment, begging for contraception for his poor, sick wife. When Restell reluctantly obliged he had her arrested. Facing five years in prison, Restell slit her own throat in her bathtub. Because April Fools was a thing even back then, there was uncertainty at first whether her suicide was real, and it was confirmed in the April 2 papers.

The public, loathe as they were to Restell, were abhorred by this turn of events. The New York Sun commented:

“[Restell] had her rights, and the man who cunningly led her into the commission of a misdemeanor acted an unmanly and ignoble part…he deceived and wheedled her into a crime.”

For those wondering, “to wheedle” means to flatter someone into doing something they wouldn’t otherwise do. It turned out that clergy were particularly anti-wheedling, and that’s how Comstock lost his base of support, the silver lining to the sad death of Madame Restell.

Down the road we’ll do posts on Margaret Sanger (who actually advocated and practiced safe birth control) and other women who defended reproductive freedom, a role in society that was criminalized in New York until 1970, three years before Roe v. Wade.

For a longer account of Madame Restell’s life, read this great Smithsonian piece.