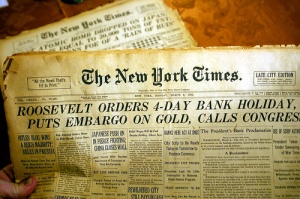 “My friends, I want to talk for a few minutes with the people of the United States about banking…”

The United States was in the darkest days of the Great Depression on March 6, 1933, when recently elected President Franklin Delano Roosevelt declared a “Bank Holiday,” shutting down the entire U.S. banking system for more than a week. A few days later, Congress passed the Emergency Banking Act. A week later, Roosevelt conducted the first of his legendary “fireside chats,” speeches made directly to the American people over radio. These acts, taken together, calmed down a panicked public and restored confidence in the American financial system.

FDR and his team had been hard at work since his November 1932 election coming up with solutions to the Great Depression, which had begun three years earlier.FDR was inaugurated on March 4, 1933, the last time before inauguration was sensibly moved to early January. His inauguration speech is famous for the phrase, “We have nothing to fear but fear itself.” This was good for Americans to hear, because at the time, they were in a bit of a panic. A state bank holiday in Michigan had prompted a run on the banks all over the country – by March, Americans were withdrawing $20 million a day from the banking system.

You often hear politicians talk about what they’ll do on “Day 1” if they get elected. It’s tough to top what Roosevelt did on his first full day as president. On March 5, Roosevelt used a World War I-era emergency statute to declare a Bank Holiday: No banks could conduct business for four days, beginning Monday, March 6. That meant no one could withdraw money from any bank during that period. The stock market, not technically covered by Roosevelt’s order, also closed.

On Thursday, March 9, at President Roosevelt’s request, Congress passed the Emergency Banking Act. The frenzy was such that when Congress voted they possessed only a single copy of the bill, which had been read out loud by Rep. Henry Steagall, of Glass-Steagall fame. The bill gave the federal government and Federal Reserve enhanced powers to deal with the crisis, and also laid the groundwork for the FDIC, which would insure a certain amount of all deposits. Roosevelt suspended the gold standard, which meant the U.S. government could print more money regardless of gold reserve holdings. Meanwhile, the two-decade old Federal Reserve committed to supply unlimited currency to banks that re-opened, further elevating business and consumer confidence.

By Sunday, March 12, the nation had been through a wild week, and it was as good a time as any for a fireside chat. The first Fireside Chat presented a calm president, gently taking the American public through the basics of the banking system, explaining why their money would be safer in banks than “under a mattress.”

The administration had extended the Bank Holiday for another three days, and on Monday, March 13, banks were presented with regulations they were required to meet before reopening. On Wednesday, March 15, most banks reopened, along with the stock market. The stock market had its most successful day ever, with the DJIA shooting up 15%. Meanwhile, the public ended up re-depositing about two-thirds of the money they had withdrawn during the run on banks. The worst of the financial crisis had been averted.

Why is this a New York story, as opposed to a national story? Not only was FDR a two-term New York governor who honed his political skills battling both with and alongside Tammany Hall, but his team bore an unmistakably New York imprint. One of his closest advisors, Harry Hopkins, had spent years running large charity organizations in New York City, and Frances Perkins, previously his New York State Secretary of Labor, became the first female cabinet member. Many of FDR’s ideas and speeches during the 1932 campaign and in the first 100 days were generated by the “Brain Trust,” Columbia University professors Adolf Berle, Raymond Moley, and Rex Tugwell. Furthermore, as we’ll see in tomorrow’s post, the importance of New York City to the banking system.