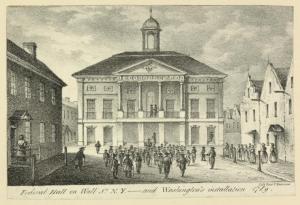 Today’s U.S. Congress may be a bunch of hot-aired do-nothings, but the first session conducted under the U.S. Constitution shows how much Congress is capable of getting done. On March 4, 1789, the House of Representatives met for the first time at Federal Hall in New York City, under the leadership of Speaker Frederick Muhlenberg (PA). The first Congress didn’t get off to the best start either- due to lack of quorum, it disbanded for the day without conducting any business. Members faced transportation woes making the trek to New York, and the House did not achieve its minimum quorum until April 1.

Once the first session actually started, Congressmen went to work setting the foundation for the United States. First, Congress certified the election results of 1788, allowing President George Washington to be sworn in at the end of April 1789. During the summer of 1789, Rep. James Madison (VA) introduced 39 amendments to the Constitution; the first ten to pass are known today as the Bill of Rights. (First Amendment, Second Amendment, etc.) In September of 1789, Congress passed the Judiciary Act, which established the federal court system more or less as we know it today. Throughout its first two years Congress also created federal agencies like the State Department and Department of Treasury, passed patent and copyright laws, defined federal crimes, and created the First Bank of the United States.

New York City served as the new nation’s first capitol, but its run was short-lived. The powerful Virginian delegation pushed for the capitol to be moved to the Potomac River. During a chance sidewalk encounter in New York City, Alexander Hamilton and Thomas Jefferson hashed out an agreement that would create a new capitol city in present-day Washington, D.C., in return for the federal assumption of state Revolutionary War debts (a centerpiece to Hamilton’s expansion of federal power). While this compromise is regarded fondly by history, it only passed the House 32-29 and the Senate 14-12, with the entire New York delegation (and many other Northerners) voting against the relocation. For the start of the 1791 session, the capitol was moved to Philadelphia, where it remained for a decade while Washington, D.C. was constructed.

Federal Hall was demolished in 1812, and the site was rebuilt as the U.S. Customs House in 1842. Today the National Parks Service runs a museum celebrating Federal Hall’s history.

The March 4 date retained importance as the last day of a Congressional session before the new Congress was seated from 1789-1933.

New York politicians played a minor role in the early days of Congress, but made a bigger impact across the rest of the young Republic: Alexander Hamilton served as Secretary of the Treasury, John Jay as the first Chief Justice of the Supreme Court, Rufus King as the British Ambassador, and Aaron Burr, infamously, as Vice President to Thomas Jefferson.