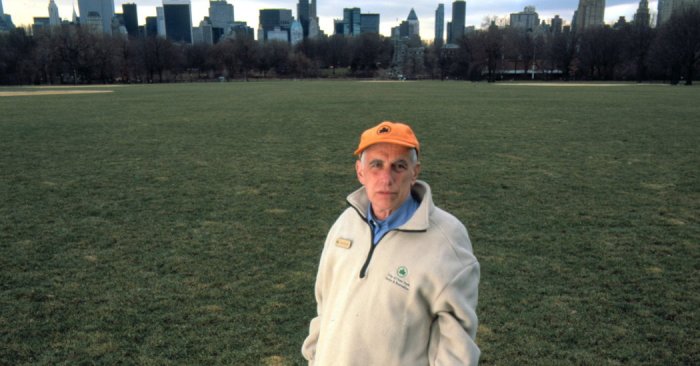 Henry Stern and I met over Big Pun. My first summer after college I was embedded in the Parks Department Historical Signs Unit with a dozen other students, cranking out short playground histories for 2001 plaques adorning outgoing Mayor Rudy Giuliani and Parks Commissioner Henry Stern’s names across the City.

My beat was the South Bronx, and one hot day I was lost looking for the “Field of Dreams.” Community residents pointed me to the “Big Pun mural,” a tribute to the neighborhood legend who’d tragically died young the year before. Eventually I found the “Field of Dreams,” but it was no field at all, just a run-down basketball court with a badly damaged rim and broken benches, notable only for the enormous mural of Big Pun and Fat Joe adorning the neighboring building. Back at the office, I insisted that Parks rename the spot the “Big Pun Courts,” and my boss humored me by handing over the paperwork.

A few weeks later, I was called into the Commissioner’s office. The room was dark save the afternoon light coming through the windows overlooking the Central Park Zoo. Henry Stern, a.k.a “StarQuest”, was in his last year as Parks Commissioner, the end of a public service career that had included cutting edge consumer protections work and an elected stint as the “at-large” councilmember for Manhattan. As he was fond of staying, “I’ve been hired, I’ve been fired, I’ve been elected, I’ve been declared unconstitutional, but I did it all under the same pension plan.”

I sat down across from him, aides flanking on either side. “The Bronx Borough President has reviewed your proposal and informed me that this Big Pun has lyrics that are considered quite misogynistic and homophobic. As a result, your proposal has been rejected.” I nodded.

“However, for your gumption and effort, I bequeath you the park name, ‘Big Pun’.” And so I joined the ranks of thousands of New Yorkers with a “nom de Park.”

At the end of the summer, I asked to stay in touch, beginning a long period of guidance. The next time I saw him he tried to sneak me in through an Asphalt Green side door to go swimming. We were caught by a security guard who admonished, “Mr. Stern, you have free guest passes, why don’t you just use them?” After a surprising number of laps, we went out for lunch, where he waxed philosophic. (“No dictator, however brutal, has had difficulty finding people to torture innocents for him.”). He advised me to go into New Hampshire politics – New York was too tribal and corrupt. Quite a road not taken. He also expressed distrust for the nascent reality TV era: “These days it’s better to be famous for something than good at anything.”

After college I spent some time volunteering at his new outfit, New York Civic, helping him with articles and events, meeting the parade of notable Parks alumni who would swing by and reminisce. This is when I learned the Rules. Always be early for meeting (“Rule 19-E, the early bird gets the worm), introduce myself to strangers so he could learn their names (Rule 20, that’s why God made staff), and tone down the inflammatory attacks in my op-eds (this is still a work in progress). I learned to maintain a healthy distrust of Democrats, especially New York Democrats, despite my liberal proclivities. (Rule 14-F, follow the money, would prove useful during my tenure on the Moreland Commission.) Like StarQuest, I began emptying my pockets to start the workday, to clear the mind. Star went on a Moby Dick kick, and tried to re-nom me “Pequod”, but I refused to be associated with a sinking ship.

Like a lengthy roster of New Yorkers scattered across government, I graduated from the school of StarQuest, on to a career of local adventures in law and politics. Many more of his rules became maxims to live by.

His prodigious memory made it easy to stay in touch, and it manifested in other magical ways, like always knowing which subway car would take us to the exit stairway on the other side. (We’d amble between subway cars to get to the right spot, to the consternation of transit cops he’d berate for trying to stop him.) Once when I was en route to my girlfriend’s apartment, he asked for the building, and then said, “Say hi to the rabbits for me.” Perplexed, I passed this along, and her eyes lit up. She pointed up towards her building, where little stone rabbits paraded the parapets.

Like Wayne Barrett, whose passing more than two years ago still feels raw, StarQuest was a mentor to many, a unique iconoclast bridging us to a different era of New York, a New York that he fiercely loved and defended.  Even as he penned pieces to hold pols of both parties accountable for shady practices, the mechanics of politics were no mystery to him. “I’ve been successful at every job I’ve had,” he reflected, “but I never would have gotten any of those jobs in the first place if it weren’t for patronage.” He loved to get rises out of people, pushing the boundaries of political correctness to exasperating levels. He once shocked a friend of mine at dinner by casually picking food off his plate without permission.

In the final years of his life, health issues largely confined him to home, and I would make the trek every year or so, often with my friend Morgan. StarQuest had become increasingly cynical about politics, but he’d get a twinkle in his eye when hearing about an old friend, or recounting an old story. The last time I saw him we walked through the Rules.

There have been many fitting tributes to his life in the last few days, lifting up his work growing our parks and combatting corruption, with hopefully more ahead. But with his passage into the firmament, New York City’s loses one of its most unique characters. Who will carry on his legacy? He would probably respond, “Rule 33.” (“That’s a question I should be asking you.”)