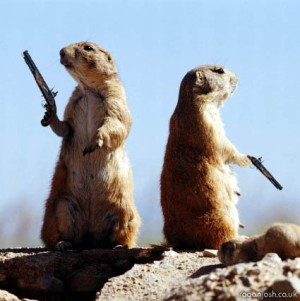 A different kind of duel, though maybe you could bet on it if knowledge of prairie dogs was a “skill.”

My life would be a lot more productive and a lot less interesting if I weren’t addicted to New York politics and fantasy basketball. Those two worlds collided last week when New York Attorney General Eric Schneiderman filed a cease & desist order against two Daily Fantasy Sports gambling sites, FanDuel and DraftKings. To make sense of it all, I exchanged a couple of emails with my old friend Crispus Knight, Daily Fantasy enthusiast and author of the coming of rage memoir, Three for Ship.

These are tough economic times for semi-educated male sports fans. I can see the appeal of a get-rich-quick scheme predicated on the only thing they’ve taken the time in their lives to study carefully – fantasy sports.  Of course, this is pretty obviously illegal gambling under New York law. Few people seem to be arguing that Schneiderman doesn’t have a strong legal case against DraftKings and FanDuel – just that he’s being a douchebag.

If Schneiderman prevails, then these Daily Fantasy Sports operators are out of commission unless they can legislate DFS into the law. Unfortunately, the Congressional sponsor of the law exempting season-long fantasy sports from “gambling” considers DFS a perversion of his intent, and the sponsor of a legalization bill in New York State is an obscure upstate Republican. I’ve never heard of this guy, and I used to make a living investigating state politicians!

I’d like to hear your thoughts on why the AG is out of line and why DFS is OK. Then I’d like you to comment on my new website, WeatherKings, where you can gamble on tomorrow’s temperature. Tell me that’s not a game of skill! 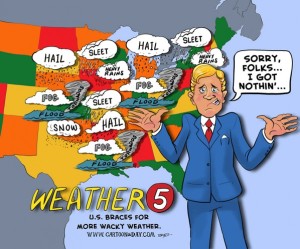 Anyone care for a side bet on the weather?

I’d like to enter a $25 wager on today’s “Megabucks Rain or Shine 50/50 Pathway to a Weather Millionaire” contest on your site, sir – I’ll take sunny and in the low 40’s (it’s a safe bet but has a limited ROI).

To start, I think we both agree Daily Fantasy Sports (DFS) is a form of gambling but I think also as a society we should separate gambling in two camps – games of chance and games of skill. DFS is certainly skill based gambling. That is evident in the fact that a small percentage of players win most of the money – the so called sharks. Despite what the Draftkings CEO said on a recent reddit AMA, it’s not like a casino – there is no “house” which is who you are competing against in blackjack. It’s vastly different from placing a wager on say the outcome of random dice rolls. Player performances are somewhat predictable based on a multitude of factors. You CAN increase your odds in DFS by increasing your knowledge of the sport you are competing in. The problem Draftkings and Fanduel are running into is that in this case, while you don’t compete against the house, it still takes a rake on every wager, which is problematic for Vegas, the NYS Gaming Commission, and now our Attorney General.

Legality issues aside, I am dismayed by the recent cease and desist requests sent to Draftkings and Fanduel for several reasons. For one, to me it exemplifies splendidly the fact that the government essentially treats gambling as though it were a cartel. It wants a monopoly on gambling in the state, and if you think it’s to protect the public, well then I have a casino in the Hudson River Valley to sell you. Slot machines and horse races in Queens, buses to Atlantic City, negotiations for Upstate casinos…. then there is of course the NY State lottery which is essentially a numbers racket. I know profits go to state coffers but it’s exploitative nonetheless and I consider it to be a hidden tax on poor communities, who provide most of the players. With a numbers racket there is no way to increase your odds of winning. It’s a prayer and a dream. Look at the slogan for the lotto – “You never know.” No, we do know. You’re not going to win.

Why do you think this has become such an issue now?  People have been playing DFS sports online for years. Is it the increased exposure? The vast amounts of money these companies are making?  The recent scandal (which turned out to be a whole lot of nothing)?  A combination of all three?  Why is the government trying to tell me how I can spend my money?

This is the error message I got at work when I tried to open that link:

How fitting. NYC government think just reading a blog about Daily Fantasy is taking it too far. 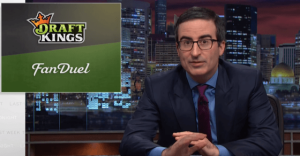 Are you accusing the government of hypocrisy? How dare thee. And how dare they tell us how to spend our money? We should be able to spend it on anything we want, except for guns and political candidates.

I do like where you’ve take us, though, the wide world of skills-based gambling. If knowledge is a skill, then you should really be able to bet on anything, from elections to who will bring cheap six-packs as their party contribution.

Aside from the technical gambling legalese, though, what we have here is a classic example of a tech company coming up with a brilliant idea: break a law that people don’t really like, make heaps of money, and negotiate from a position of strength. Doing that takes a certain amount of gumption, a value we like in a people, and a total disrespect for the social contract, which can be dangerous.

AirBnB, Eric Schneiderman’s previous bete noire (vive la France!), knew they were disobeying the law, but also knew the rent starved masses of San Fran and New York would back them. Uber was even more cynical – it bought off the political establishment and celebrities, just in case the masses weren’t enough. Is this bully approach to corporate power worrisome, or is it ok because its formula rests on popularity with the people?

With strength and honor,

You make some really good points but I wonder if the “negotiating from strength” strategy was flawed in this case. Would Draftkings and Fanduel be in this position if they had approached lawmakers last year saying “Look, this thing is becoming insanely popular. We want to get proper regulations in place and an official exemption passed through the legislature. There is an ungodly amount of money in play here, we have investors from all the major leagues and you deserve a cut too. We’re going to be running ads 24/7 in a few months and you won’t be able to ignore us.” Instead of what they’re doing which is basically claiming this isn’t gambling and that they are the subject of a witch hunt.

With Uber and AirBnB you have companies delivering needed services – transportation and housing – that many have come to rely on. With DFS we have what is essentially a vice as the service, albeit an extremely popular one. I’d like to see a poll asking folks if they believe DFS sports should be illegal. My gut tells me that the overwhelming majority will be in favor of an exemption for the industry, even if they don’t play themselves. And those against such an exemption will probably reference the extremely annoying marketing campaign as the primary reason for their opposition.

This cease and desist letter only makes sense if the AG really truly believes in his heart that allowing DFS to exist is detrimental to the public good. I just don’t see it. Gambling bans came to New York partially because of the stranglehold organized crime had over the industry. With DFS you don’t have those concerns and it seems to me to be a totally safe way for consumers to wage bets online. And to your point, yeah betting on the outcomes of anything should be allowed. I don’t really see a market for “Daily Fantasy World Events” but I think it’s an excellent satirical idea that I’m strongly considering including in my upcoming novel (release date TBD).

Be right back, I gotta go set my lineup for the night.