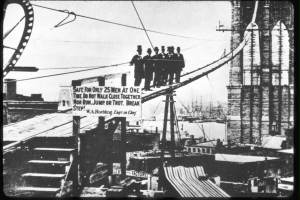 According to psychologists Paul Piff and Dacher Keltner, when humans experience the “wonder and beauty of the world around them,” they are more generous to strangers; people feeling awe are more willing to appreciate our collective humanity. We obviously need more awe in New York politics, where we are stuck with small men and small ideas. Fortunately, a recent poll suggests that New Yorkers are more than ready to flush our current batch of politicians out of the system and start over.

While reading a book about Penn Station I came across the following comment from the New York Times about a yet-unbuilt bridge across the Hudson River:  “Of all the great improvements projected or dreamed of in and about this City, this is unquestionably the most important.” What project in New York City or New York State could that sentence possibly describe today?

Instead of big dreams, New York politics peddles staged drama and small-bore battles, elements caked into its culture over decades.  Even the state capital feels like a museum, quiet but for tour groups admiring exhibits from bygone eras of ingenuity. Albany is where awe goes to die.

During the last few weeks the public has learned about Anthony Bonomo, Charles Dorego, and Steve Pigeon, three men who were well-known in Albany watering holes and back rooms for their ability to deliver campaign cash. Bonomo, who owns Brooklyn Boyz Stables, a horse-racing outfit (and a gaggle of insurance companies), was recently named by Governor Cuomo to head the New York Racing Association. He and his family have lavished Cuomo with contributions for years. Dorego is the top henchmen for centenarian tycoon Leonard Litwin’s real estate empire, which has contributed enormously to every lever of power in state government. Pigeon is known as an upstate fixer, a bagman for billionaires who has wreaked havoc on state politics since he flipped the State Senate in 2009.  All three are now part of ongoing criminal investigations.

Albany has been shaken up by the anti-corruption rampage of U.S. Attorney Preet Bharara, whose office has taken down Speaker Sheldon Silver and Senate Majority Leader Dean Skelos, with more to come. The public is not only behind him; the latest polls show that a lot of New Yorkers are itching for him to do even more.

But Bharara can’t do it alone, even he admits that. When he testified before the Moreland Commission, he called on the press to dig deeper, to give him some help, to follow the money. Instead of waiting for influence-peddlers like Bonomo, Dorego, and Pigeon to get investigated by the feds, journalists should proactively ask what these money men want in return for their investment every time the Board of Election publishes their latest disclosures. After all, the Moreland Commission said repeatedly that the most corrosive money in politics was given legally. Data sleuth Jon Reznick and I will be publishing a piece on the biggest donors spreading money around Albany once the semi-annual fundraising numbers are released this July.

As a public, we should be asking what promises politicians are making to contributors who contribute thousands of dollars to their campaigns. We should express concern that real estate developer Leonard Litwin appears to be implicated in two separate federal investigations, but not a single politician is ready to return money that he gave to them. Keeping your head down and waiting for the storm to blow over is the Albany way. The good news is that the Albany cabal no longer fools everyone.

The time has come to Primary Everyone. The latest Quinnipiac poll asked, “Do you think New York State elected officials are capable of ending political corruption in Albany or should all current elected officials be voted out of office so new officials can start with a clean slate?” New Yorkers voted “throw the bums out” by a staggering 55%-28% margin. Bucking the usual trend, people would actually get rid of their own State Senator by a margin of 45%-40%, with Assemblymembers at a 41%-41% toss-up. There is a mandate in New York to clean house. After all, even if Preet Bharara takes down every corrupt official in this state, we will still need a new generation of leaders to build New York back up.

Zephyr Teachout is on to this, stumping across the state urging teachers to run, but we need people of every professional other than “lifelong politician” to get in the game. Challengers to the system should run on big ideas and inspiring character, and take advantage of a New Yorker mindset ready for someone new. According to research by Google, today’s voters are plenty informed, but more cynical than ever. They need to be awed again. Our whole civic system hangs in the balance.

I’ll be writing more about specific “big ideas” and the movement to “Primary Everyone” in the weeks ahead. For more on New York City history and current events, you can follow Janos.nyc on Twitter or Facebook.