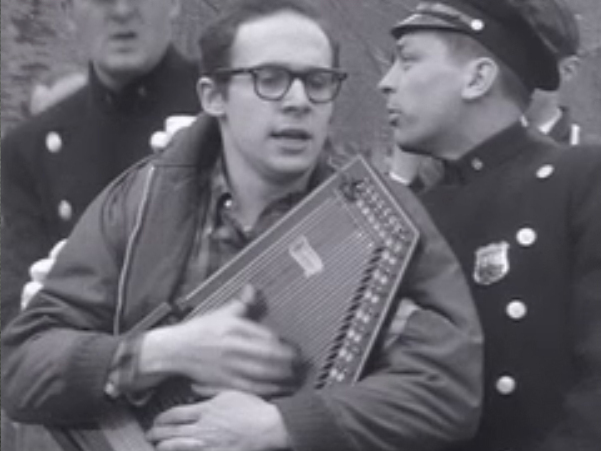 Image taken from “Sunday”, a documentary about folk singers’ protest.

Janos.nyc reader Jon Reznick has joked that this site is a daily history of riots in New York City, and it’s true that Gotham’s manic energy has lent itself to nearly every type of riot imaginable. So why not a folk singer riot?

In 1961, beatniks were ascendant. Ginsberg and Kerouac were mainstream hits, and the West Village was the American centre of bohemia. Some had taken to playing guitars and hanging out in Washington Square Park. When Parks Commissioner Newbold Morris insisted the folk singers acquire permits to play in the park, then summarily rejected their permit requests, folk singers and Beatniks responded by holding a protest on April 9, 1961, which did not end well. The mass arrests were captured in a documentary made by videographers who happened to be on hand.

At that point, the folk movement started organizing. The Reverend Howard Moody, pastor at Judson Church, founded the “Right to Sing Committee,” and led a major rally calling against the Parks Department: “We believe – myself and my church – you have the right to sing in Washington Square.” Political newcomers like Ed Koch and Carol Greitzer took the side of the folk singers.

On the other side of the fence, Commissioner Morris denounced the folk movement for attracting “elements from the Bronx and so on,” and was supported in his efforts to restrict access to the park by the NIMBYist Committee to Preserve the Dignity and Beauty of Washington Square Park.

On April 23, a crowd of two thousand led by Rev. Moody sat in the park, sang songs, and played guitar. The NYPD looked on, but took no action against them this time around. Meanwhile, a lawsuit against Morris’ ban wound its way through the court system, eventually ruling in favor of the commissioner. At that point, lawyers for the singers realized that the old requirement for permits itself only applied to “minstrelry,” which is defined as singing accompanied by instrumentation. The singers returned to the park, sans guitar, and sang “This park is your park” and other protest songs a capella.

Mayor Wagner, watching all of this unfold in an election year, decided to minimize his headaches, and overruled Commissioner Morris. The folk singing could continue, with guitars, as before. The only new rule: no bongos. This compromise, amusingly similar to a compromise brokered during Occupy Wall Street at Liberty Park, satisfied everyone except for the bongo-loving beatniks. The folk scene continued to thrive, the turmoil resolved just as its newest member, Bob Dylan, rolled into town.

For a great book on the history of music in New York City, check out Tony Fletcher’s All Hopped Up and Ready To Go.

One thought on “This Week in NYC History: Folk Singers and the Right to Sing at Washington Square Park (1961)”