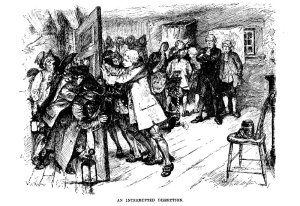 “An Interrupted Dissection” from Harpers Weekly.

Waving severed limbs at children. Graverobbing. Fleeing angry rioters. The medical profession has definitely come a long way since April 16, 1788, when a mob of New Yorkers, some literally armed with pitchforks, came looking for doctors who had been digging up the dead to teach medical students with their cadavers. Using the deceased to teach medicine was hardly limited to New York City, nor was it even news there. A few months earlier, black residents had complained of Columbia College and other private medical schools (which were then a few sessions long, rather than four years) using fresh graves from the African Burial Ground, but their pleas went unheeded. The African Burial Ground, on Duane and Elk Streets, near today’s courthouses, was then just north of the city limits, and despite being used to bury more than 15,000 people, was forgotten until an accidental excavation in the early 1990s.

On April 16, rumor has it that a medical student freaked out a bunch of kids by waving a severed arm at them through the window of New York Hospital, on Broadway and Pearl Street, and taunting “This is your mother’s hand. I just dug it up. Watch it or I’ll smack you with it!” When it turned out that the mother’s grave was empty, the father led an angry mob to New York Hospital.

After the mob discovered bodies being dissected there, they destroyed medical equipment, burned cadavers, and stormed through town hunting for doctors. Doctors and med students hunkered down at Columbia and in the city jails, where Mayor James Duane tried to protect them. One rioter stormed the barricades and was killed by a guard, which escalated the confrontation significantly. Governor George Clinton called in New York’s well-armed and well-regulated militia to keep the crowds at bay. This strategy worked until someone clocked Secretary of Foreign Affairs John Jay with a rock, which fractured his skull. Then the militia opened fire. By the end of the showdown, seven or eight people were dead. (More potential cadavers?)

In the aftermath of this grisly affair the legislature passed a bill outlawing grave robbing, though I suspect, like many emotionally driven legislative bills, it was redundant given existing trespassing and property laws. The bill did allow med students to keep using cadavers from those executed for murder, arson, or burglary. (That was how I learned you could be executed for burglary in 1788!) The reputation of medical students took an enormous hit during the whole affair, which led to the modern American med school system. Students now spent two years training under certified physicians, and then took an official government exam to earn their licenses. So for all of you med students, residents, and specialty fellows, good luck in your programs, which might have been shorter if your predecessors hadn’t gone around digging up graves. Then again, how else were we supposed to learn about the human body?

To read the most thorough account of the Doctors’ Riots, check out this piece from the Smithsonian Magazine.