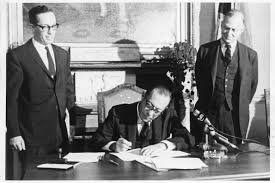 The tearing down of the ornate old Penn Station inspired a push to create New York City’s first landmarks law, which Mayor Robert Wagner, Jr. signed on April 19, 1965. Celebrations, tributes and symposia are taking place over the city – there is even a whole website dedicated to the anniversary. There are now 1,348 official landmarks, 114 historic districts and 117 interior landmarks that cover a total of 33,411 properties. That’s pretty robust, and some critics suggest New York may be over-preserving.

At Untapped Cities, friend of the site Michelle Young interviews curators of the new Museum of the City of New York exhibit, Saving Place, about the 50th anniversary.

An interesting take in Reason about whether the old Penn Station was actually worth saving.

The New York Times covered a party thrown to celebrate the anniversary featuring a whos who of the city’s political/preservation/media crowd.

If we see interesting tributes or takes on NYC’s landmarks preservation law we’ll update this post. Please comment with your own thoughts and suggestions!