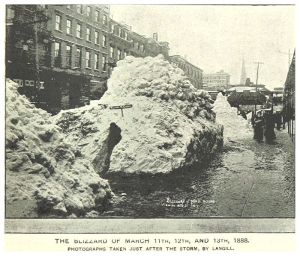 The aftermath, on 14th street.

Before you get too excited about spring being just around the corner, remember that from March 11 to March 14, 1888, one of the most intense blizzards in American history buried New York City under mounds of snow and brought the city to a standstill.

When the head of the national Weather Bureau, Elias Dunn, closed up shop at his office on 120 Broadway on Saturday, March 10, nothing seemed out of the ordinary. At the time, the Weather Bureau kept in touch with the Coast Guard through telegraph and carrier pigeons(!), and Sunday’s forecast called for light rain. No one manned the Weather Bureau on Sundays, but following torrential downpours, Dunn decided to check anyway. There were no updates, because, it turned out, telegraph lines had frozen up and down the Atlantic Coast. 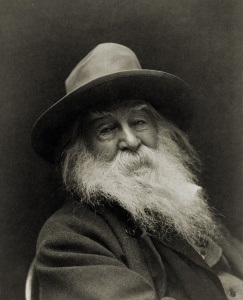 Photo courtesy of the Bowery Boys.

Walt Whitman had just published his new poem, The First Dandelion, about the coming of spring. It ran in the New York Herald the day of the blizzard. Doesn’t Walt Whitman look exactly like Gandalf the Grey? Here’s the poem:

Simple and fresh and fair from winter’s close
emerging,
As if no artifice of fashion, business, politics,
had ever been,
Forth from its sunny nook of shelter’d grass—
innocent, golden, calm as the dawn,
The spring’s first dandelion shows its trustful
face

Starting at midnight on March 12, it snowed continuously in New York City for about 36 hours, piling up 20-40 inches of snow. Fierce winds created massive snowdrifts, with some accounts claiming drifts as high as 50 feet, and plenty of photographic evidence showing 15-20 foot drifts that barricaded people inside their homes. Julian Ralph’s Monday morning account of the blizzard morning is mesmerizing.

The wind howled, whistled, banged, roared and moaned as it rushed along. It fell upon the house sides in fearful gusts, it strained great plate glass windows, rocked the frame houses, pressed against the doors so it was almost too dangerous to open them. It was a visible, substantial wind, so freighted was it with snow. It came in whirls, it descended in layers, it shot along in great blocks, it rose and fell and corkscrewed and zigzagged and played merry havoc with everything it could swing or batter or bang or carry away.At half past ten o’clock, not a dozen stores on Fulton Street had opened for business. Men were making wild efforts to clean the walks, only to see each shoveful of snow blown back upon them and piled against the doors again. 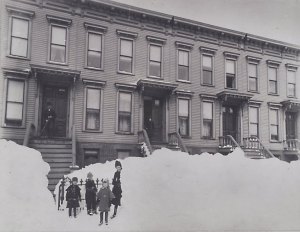 Elevated trains were stranded up and down the tracks. Some passengers escaped to the street via ladders set up by the fire department or enterprising individuals on the ground. One train, stuck above a bar, was able to hoist up buckets of beer to pass the time in revelry. This fiasco gave a major push to underground subway advocates, and work on the subway system commenced a few years later. Much was made of Andrew Cuomo’s decision to shut down the subways during last month’s so-so snowstorm. The entire system had never been shut down before because of snow, and was indeed designed to withstand that exact act of nature.

New York City was overwhelmed by fire and flooding. During and immediately after the blizzard, fire trucks were unable to move, and unchecked fires destroyed buildings all over the city. As the snow started to melt, another set of buildings were irrevocably damaged by flooding. Two hundred New Yorkers died during the blizzard, one of the largest losses of life from any event in city history, and the financial costs were catastrophic.

Among the dead were legendary political power broker Roscoe Conkling. Conkling was a U.S. Senator, wealthy Wall Street lawyer, the political benefactor of President Chester Arthur and facilitator of Gilded Age money and Republican politics. Outraged at price gouging by the cab he hailed in the middle of the snowstorm, he defiantly walked home. Or rather, he tried to, collapsing in the snow and dying two weeks later. 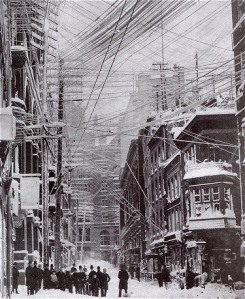 One of the biggest hazards in the aftermath of the blizzard was navigating the telegraph and electric wires. The blizzard had brought not only snow, but devastating winds of up to 84 mph, knocking over poles.

In a blistering series of articles recounting the danger and damage afterwards, the New York Times demanded, “that all the electric wires – telegraph, telephone, fire alarms, and illuminating – must be put underground without any delay.” The city took steps to do this, at least in most of Manhattan, and that’s why downtown doesn’t look like the photo on the left.

Even though most of the city was shut down, the nightlife hummed along. Because conditions got too crazy to leave bars by nightfall, a number of bars threw wild, all-night parties. P.T. Barnum, proprietor of Madison Square Garden, insisted the show must go on, and handed out champagne to his sparse crowd, who eventually got drunk and danced in the circus infield while clowns cheered them on.

Our city infrastructure and ability to detect weather patterns are both vastly improved since 1888, but I wonder if the people are as hardy. Let’s hope blizzard season is over, and hope that those first dandelions get to blooming. 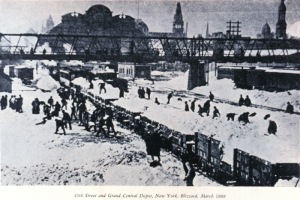 Grand Central during the blizzard.