This year Presidents’ Day comes on the heels of the coldest night of the winter, a fitting time to remember that one of our favorite president’s, Teddy Roosevelt, once kicked thousands of homeless people into the streets.

The story begins with Jacob Riis and his puppy. Riis is best known for his photo essay, How the Other Half Lives, a damning expose New York’s tenements. But before he was a famous social reformer, the Danish immigrant was on hard times himself, struggling with homelessness in the 1870s.

One night of wandering led to a chance encounter with a little dog, who loyally followed him around the city. The pair developed a bond. When Riis sought refuge in a police lodging house, the dog was denied entry. A conflicted Riis bid him goodbye, needing respite from the cold night. Riis awoke in the middle of the night to find another lodger had robbed him. When he complained to the policeman on duty, he was called a liar and thrown out of the police station.

His loyal little friend, who had been patiently waiting at the door, reacted to seeing Riis treated this way by attacking the policeman and biting his leg. The policeman grabbed the dog and smashed him against the station steps, killing him. Riis was beside himself with grief and rage, and pinpoints this exact moment as launching his life as a social activist.

The kind of police lodging where Riis had attempted to spend the night had become increasingly common since the 1860s. Low Life author Luc Sante estimates that between 100,000 and 250,000 people per year took shelter there. As Eric Monkkonen documents in Police in Urban America, these cold, leaky, drafty lodging houses were a petri dish of diseases that would spread quickly through their populations and onto the police force. One police doctor lamented, “More miserable, unhealthy, horrible dungeons could not well be conceived of,” which sounds pretty rough by 19th century standards. The most common afflictions were tuberculosis, lice, and syphilis, the last of which can’t be blamed on the housing. Reformers had long hoped to shut down such institutions. In 1894, when Riis met Teddy Roosevelt, they got their best chance.

Teddy Roosevelt is one of the most popular figures in American history- a progressive and a Republican, a rancher and explorer, an ardent conservationist and fierce trust-buster. He came from wealth but was not of it. As a young man he wrote best-selling books about bird watching and naval warfare. Hard not to find something to like about the guy.

Teddy was also a New Yorker. Here he made his career as a precocious 20-something Assemblymember from the Upper East Side. In 1886, Roosevelt ran for mayor and came in third, a loss that he called, “the end of my political career.”  He stayed on the radar in progressive circles, however, and in 1895 he was named NYC Police Commissioner, a position he held for two years. 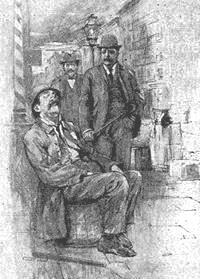 Roos and Riis, touring the town.

On February 8, 1896, Riis took Roosevelt on a tour of police lodging houses, including the specific one that had so mistreated him nearly 20 years earlier. A disgusted Roosevelt promised Riis, “I will smash them tomorrow.” A week later, on February 15, Commissioner Roosevelt shut down all of the police lodging houses in the city. Afterwards, Riis wrote, “The battle is won. The murder of my dog is avenged.” For the for the rest of his career, Riis would end lectures thundering, “My dog did not die unavenged!”

Like other “reforms” of this era, it wasn’t clear how the poor were helped by having one of their last, desperate housing options taken from them. Grim as police lodgings may have been, there wasn’t much to replace them. Official municipal lodging houses opened for the first time that year, but they had limited beds and had problems of their own, with churches and other charity organizations doing their best to fill the gaps. Perhaps Roosevelt could have at least waited until spring.

New York City did not have a dedicated Department of Homeless Services until 1981, when a state court ruled that the state government had an obligation to provide shelter for its residents. Picture the Homeless believes that there are over 60,000 homeless people in New York City, a number that skyrocketed under Mayor Bloomberg.

Riis would continue to document social ills for the next 20 years, and five years after he shut down the police lodges Roosevelt ascended to the presidency. Both men did great things for New York City and the United States, but their approach to solving homelessness on this cold February night were more questionable.

I reached out to Northwest Indiana history professor Jim Lane, who wrote the book on Jacob Riis. He posted this follow-up on his blog.

Scholar Janos Marton wanted information on Jacob A. Riis, in particular his “game plan for homeless people once NYC Police Commissioner Theodore Roosevelt closed the city’s police lodging houses.”  In “Jacob A. Riis and the American City” I wrote that during a midnight inspection tour Riis told TR that 25 years before, at Church Street police station, which offered free lodging, albeit, in a foul-smelling room jammed with “tramps,” someone stole his prized possession, a locket containing a curl of his future wife’s hair.  When he protested, a sergeant on duty threw him out and killed his canine friend.  Hearing what happened to his friend, Roosevelt irately pounded his fists together and said he’d rid the city of the menace.

In February 1896, I told Janos Marton, applicants for shelter were transferred to a barge on the East River, and authorities began separating those deemed deserving from tramps and thieves.  As a result the numbers dropped from 10,000 to 200, many who needed help found themselves out in the cold.  Riis lauded the Charity Organization Society’s Wayfarers’ Lodge run and two model lodging houses founded by philanthropist D. O. Mills dedicated to the promotion of manliness, self-reliance, and good citizenship. Too easily swayed by contemporary principles of scientific philanthropy at that time in his life, Riis also looked askance on charity soup kitchens run by Tammany Hall allies.