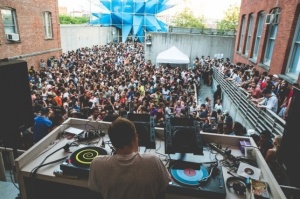 No renderings of the original PS 1 remain, but we can guess it looked something like this.

During the 18th century, the only schools available to New York kids were private schools run by churches. One example is my alma mater, Collegiate, which was founded by the Dutch Reformed Church in 1628. This system created a gap between the haves and have-nots, and civic leaders began urging the state legislature to fund schools for poorer children. On April 9, 1795, Governor George Clinton signed a bill allocating $50,000 to assist charitable schools across the state. Unfortunately, the money was not renewed in 1800. The fight for a more serious commitment to “common schools” resumed.

One of public education’s champions was New York mayor and future governor Dewitt Clinton (George Clinton’s nephew), who explained the two moral imperatives behind common schools. First, education was a right, not an inherited privilege:

Here, no privileged orders, no factitious distinctions in society, no hereditary nobility, no established religion, no royal prerogatives, exist to interpose barriers between the people, and to create distinct classifications in society. All men being considered as enjoying an equality of rights, the propriety and necessity of dispensing, without distinction, the blessings of education, followed of course.

Second, relying on a charity-based education model, in addition to being inadequate, would leave behind the children of society’s most depraved, who had no ties to religious or charitable organizations. Referring to the cycle of poverty and crime that would trap these children, Clinton remarked, “the evil must be corrected at its source, and education was the sovereign prescription.” A public education system must be available to every single student, regardless of family background.

On April 9, 1805, precisely ten years to the date of the previous school funding bill, the legislature passed “the Act to incorporate the Society instituted in the city of New York, for the establishment of a free school for the education of poor children who do not belong to, or are not provided for by, any religious society.”

The bill refers to the Free School Society. This was a group of Quakers that had been at the forefront of the push for universal education. Even before 1805, Quaker groups had opened a school for poor girls and the Manumission School for children of slaves and free people of color. Formally organized in 1805 with Clinton’s backing, the Free School Society received the first state charter to operate free schools available to all.

Most accounts, including Diane Ravitch’s The Great School Wars, suggest that the 1805 legislation did not fund schools, but only allowed the Free School Society to raise funds for them via subscription. (Oddly, the NYS Board of Regents website claims that the legislation was supported by funding from state land sales.) According to Ravitch, the first school was opened on May 19, 1806, in an apartment on what is now Madison Street. The Epic of New York instead gives attention to Public School No. 1, which opened on Chatham Street, now Park Row, on April 28, 1807, and A. Emerson Palmer’s somewhat incoherent centennial on the 1805 legislation highlights the opening of Free School No. 1 on December 11, 1909.

These inconsistencies aside, all accounts agree that funding was low and growth slow during the early years of the free school movement. By the 1830s, however, the idea of a robust state-funded school system had taken hold, leading to the creation of the modern Public School System of New York. The free school system was on its way, though it would run into controversy a few years later when the question of state funding for religious institutions reared its head. We’ll discuss that tomorrow.