Normally we don’t associate tugboats with disruption and chaos, but at a time when New York City’s shipping industry was king, the Tugboat Strike of 1946 threw the City into turmoil. The strike began February 4, and by the time it was over, it had brought the City to its knees.

After World War II, New York City was home to forty active shipyards, its harbor central to both the war effort and the commercial economy. Tugboats were an essential part of the ecosystem, moving freight between railcars and larger ships, including most of the City’s coal supply and and 95% of its fuel oil.

Discontent on the docks ran high during the winter of 1946. Wage freezes enacted during the war had not thawed, in part because the federal government still regulated pricing in freight industry. Tugboat owners weren’t seeing additional profit, and saw no reason to raise worker wages. On February 4, 3,500 tugboat workers launched a strike. Recently-elected Mayor William O’Dwyer, dealing with this five weeks into his first term, called the strike “the worst threat ever made to the city.”

Given that the United States had just finished fighting World War II months earlier, such a statement sounds like hyperbole. It is also interesting to consider that for all of the patriotism we imbue the Greatest Generation, they were frustrated enough with their wages to shut down the nation’s largest port. On February 6, President Harry Truman seized control of the tugboats and demanded the workers end their strike, but they voted two to one to continue. 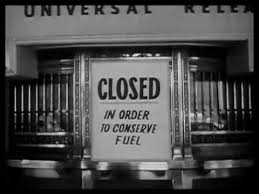 With limited coal and oil coming into the City in the dead of winter, Mayor O’Dwyer began emergency measures, ordering advertisers to turn off their lights, mandating that buildings lower their thermostats to 60 degrees, and shutting the heat off on the subway system.

On February 8, O-Dwyer closed the public school system, which could no longer be heated. The strike continued on into a second week. On February 11, O’Dwyer ordered all stores, museums, theaters and restaurants closed. Police were stationed at an increasingly dark midtown to turn tourists away. The New York Times called the strike, “the most drastic disruption of the city’s life since the Civil War draft riots.” The Draft Riots were the most deadly local uprising in American history, so the Tugboat Strike might have to settle for a distant second. For those of us who were in the dark zone during Hurricane Sandy, a city-wide version of that period might prove a useful analogy.

February 12 was a ghostly experience. One New York World-Telegram depicted a scene in which New Yorkers, “struggled to do all their accustomed little things while a dreadful, unnamed power held them in its grasp. An air of unreality hung over the city. Incidents took on a staccato, dream quality; sharply etched, touched with hysteria, cockeyed.” On February 13, the workers and owners agreed to O’Dwyer’s proposal for arbitration.

Remarkably, no account of the Tugboat Strike plays out the post-script. Did the strike actually lead to meaningful wage and benefit increases? In December 1946, negotiations were still ongoing, with contemplation of another strike on the docket.

For all of their gumption, however, tugboat operators and their fellow dock brethren did not realize that their days of bringing such leverage to the negotiating table were numbered.

One of the amazing tributes to New York City’s vibrancy is that it has weathered to the collapse of what was once its two greatest industries – shipping and manufacturing – and remained an economic powerhouse. Both industries began steep declines after World War II.

The shipping industry was undermined by the ascendance of the trucking and aviation industries, and the development of underground gas lines. Further, even the ships that continued to dock in New York City increasingly relied on “containerization,” a new mass freight transportation method that took off in the mid-1950s. If you are a fan of The Wire, this was a major theme of Season 2.

If there was any doubt of the demise of the New York City shipyard and its unions, the 1988 Tugboat Strike resulted in a fierce blowback from towing companies, and much of the labor force was decimated.

You can watch a video of New York City during the 1946 Tugboat Strike. There’s not much going on, which I suppose is the point.

For more about the history of New York City’s unions, check out Working Class New York by Joshua Freeman.